They will dedicate their lives to their country, but no one will ever know…

A compelling story about tenacity and friendship, inspired by the real codebreaking women of Australia’s top-secret Central Bureau in WWII. For readers who love Judy Nunn and Kate Quinn.

1943, Brisbane: The war continues to devastate and the battle for the Pacific threatens Australian shores. For Ellie O’Sullivan, helping the war effort means utilising her engineering skills for Qantas as they evacuate civilians and deliver supplies to armed forces overseas. Her exceptional logic and integrity attract the attention of Central Bureau – an intelligence organisation working with England’s Bletchley Park codebreakers. But joining Central Bureau means signing a lifetime secrecy contract. Breaking it is treason.

With her country’s freedom at risk, Ellie works with a group of elite women who enter a world of volatile secrets; deciphering enemy communications to change the course of the war. Working under immense pressure, they form a close bond – yet there could be a traitor in their midst. Can the women uncover the culprit before it’s too late?

As Ellie struggles with the magnitude of the promise she’s made to her country, a wedge grows between her and those she holds dear. When the man she loves asks questions she’s forbidden to answer, how will she prevent the double life she’s leading from unravelling?

‘Shadowed by the mansion at Nyrambla, this little garage had been the centre of her world for two and half years. The walls had witnessed the women handling some of the war’s most top-secret messages and ensuring they got into the right hands at Bletchley Park, Arlington Hall and countless outposts around the world. The messages they’d decrypted and encrypted has saved lives and helped the troops come home to their loved ones. All this happened under the roof of a regular-looking garage in suburban Brisbane and no one outside the Central Bureau would ever be the wiser.’

A previously hidden female history is the central concern of Alli Sinclair’s latest Second World War title, The Codebreakers. During World War II many ordinary Australian women stepped up to the challenge to combat invasion on home soil to perform extraordinary tasks to support the war effort. The Codebreakers highlights a very special task force who daringly completed top secret activities during the war. Thrilling, revealing, surprising, inspiring and powerful, The Codebreakers is a high-minded slice of Australian wartime fiction.

Drawn from the real-life testimonies of Australia’s brave garage girls, Alli Sinclair’s latest historical fiction verse is a must read. Taking the audience back to the year 1943 in Brisbane, we gain a solid picture of the war from the home front. While Australia was facing uncertain times, a fearless group of women pulled together their skills to help in the war effort. For the lead of this amazing story, Ellie O’Sullivan, life during the war is about lending a hand. When Ellie’s efforts capture the attention of the Central Bureau, this brave and intelligent woman must step up to the challenge. Ellie is tasked with the responsibility of protecting her country. Ellie must collaborate with an exceptional group of women who use their unique knowledge and skills to crack enemy codes. With trust, threats, secrets and personal loyalties dominating this elite group, they must forge forward in unison in order to succeed in a pressure filled environment. The Codebreakers illuminates the work of the Central Bureau and the challenges faced by women like Ellie, who selflessly sacrificed their relationships for the greater good.

I’m not going to hide my admiration for Alli Sinclair, which hasn’t abated over the years since I first discovered her debut novel Luna Tango. Alli Sinclair is an author completely committed to refining her craft with each book she releases and The Codebreakers is her most ambitious novel yet. A wealth of research backs The Codebreakers. Alli Sinclair’s new composition is directly drawn from first hand accounts from Australia’s real life garage girls, the codebreakers who worked tirelessly and secretly to support the war effort. Supporting the authenticity of this novel is the research conducted by Alli Sinclair and the advice this talented storyteller sought out during the production of The Codebreakers from experts in the field. The end result of this passionate commitment to getting all of the details right is an extremely vivid and well-informed female focussed history tale.

Ellie O’Sullivan is Alli Sinclair’s lead and she is just fabulous. The image I conjured in my own mind of this amazing woman, a trailblazer of her time, was a figure of pure strength and high intelligence. I was quite in awe of Ellie and her achievements. This could also be said about Ellie’s friends and support staff at the Central Bureau hub. The fellow codebreakers who join Ellie on her incredible journey are all very inspiring. It is important that we highlight the achievements of these undercover agents. The efforts of those who worked tirelessly for Central Bureau was concealed for decades, so it is vital that we give these women the recognition they so rightly deserve, whether it be in a fictional novelisation or another format.

Not only is this a powerful story of a heroic band of women who tirelessly gave up their lives to save others fighting on the battlefields, this book offers the reader so much more. The Codebreakers encompasses feelings of sisterhood, friendship, comradery, love, faith, endurance, resilience, bravery, sacrifice, support and trust. Sinclair draws in some pertinent themes surrounding sexism, gender relations, women’s roles and societal expectations. With a realistic picture of wartime Brisbane as the backdrop to these main issues, The Codebreakers is a fulfilling read from cover to cover.

The Codebreakers by Alli Sinclair was published on 3rd March 2021 by Mira –AU. Details on how to purchase the book can be found here.

To learn more about the author of The Codebreakers, Alli Sinclair, visit here.

*I wish to thank Harlequin Australia for providing me with a free copy of this book for review purposes. 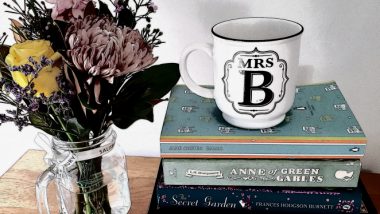 A Tea Break with Mrs B: Fleur McDonald