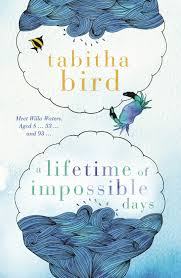 Title: A Lifetime of Impossible Days

On one impossible day in 1965, eight-year-old Willa receives a mysterious box containing a jar of water and the instruction: ‘One ocean: plant in the backyard.’ So she does – and somehow creates an extraordinary time slip that allows her to visit her future selves.

On one impossible day in 1990, Willa is 33 and a mother-of-two when her childhood self magically appears in her backyard. But she’s also a woman haunted by memories of her dark past – and is on the brink of a decision that will have tragic repercussions . . .

On one impossible day in 2050, Willa is a silver-haired, gumboot-loving 93-year-old whose memory is fading fast. Yet she knows there’s something she has to remember, a warning she must give her past selves about a terrible event in 1990. If only she could recall what it was.

Can the three Willas come together, to heal their past and save their future, before it’s too late?

Jam drops, gumboots, a mango tree and a magic box containing a jar of water are just some of the objects that play an integral role in the Tabitha Bird’s debut novel, A Lifetime of Impossible Days. A book about life, love, family, memories, choices and chances, this magical novel will enchant you from beginning to end, as you come to embrace the three beautiful souls who define the very being of this novel.

Beginning in the year 1965, with an eight year old girl named Willa, life is a battle. Willa’s escape from the crisis that is constantly unfolding in her home is a box containing a simple jar of water. Willa makes sure she carefully follows the instructions set out to her via the box and somehow she manages to open up a time slip portal, welcoming in her future self. The concept seems unfathomable, but it happens again to Willa in the 1990s. Aged in her 30s, with a husband and children in tow, Willa can’t believe it at first when she confronts her eight year old self. Finally,  in the year 2050, Willa is now a woman of the grand old age of 93. Her days are numbered, along with her fractured memories. A chance to give a prior warning to a significant event in her past drives Silver Willa. She must summon all the strength she can to help her past selves prevent this tragedy from occurring. A Lifetime of Impossible Days is about taking a leap of faith and salvation, in order to protect the passages of the past, present and future.

Now I have finished this absolutely spelling binding novel, which managed to work its way into my heart and soul, I’m still debating as to whether it was the best time to read this emotionally moving debut from Tabitha Bird. I recently suffered the loss of my Nanna and my last grandparent, who was almost the same age, save a year, as dear Silver Willa. I found I could relate to Silver Willa, there were so many traits that I saw in this character that were mirrored in my own Nanna’s life, especially towards the end. It was emotional at times to feel so connected to this character, especially after my recent loss. But at the same time, I was reminded of the good things about my Nanna and her life. It also helped me to understand a great deal about how Nanna’s fading memories towards the end of her life made her head hurt from trying to recall important key events. Silver Willa, the oldest version of Willa, experiences this very same feeling in the book. Bird covers the ageing aspect of her novel incredibly well, balancing sensitivity and insight, within an engaging narrative.

And then there is the 1965 storyline involving Willa as an eight year old girl. Although tough at times due to the content (domestic violence and abuse), I feel that Bird portrayed this chapter of Willa’s life with honest and brave detail. It may be hard for some readers to get through and it may induce an emotional reaction. Bird is mindful of the nature of what she is presenting, her words are courageous, refined and touching. She manages to bring the goodness and light out of tough times. There is a gentle delicacy to the writing in these areas of the novel that I appreciated very much. The sense of family, duty, loyalty and protection is strong. It will move any hardened reader to tears.

Middle Willa, aged in her 30s, is the Willa that I found I developed the strongest connection to. I think as a woman aged roughly around middle Willa’s age I was able to relate to her life circumstances. I had the cheer squad out for middle Willa, I wanted her to save the day, to reach into the future and protect the potential hurt from occurring. I also wanted middle Willa to save her family, marriage, sister and protect herself. There is a lot riding on middle Willa. I adored this time slip the most, thanks to some solid characterisation and powerful writing.

I have to admit that I was initially more than a little skeptical about how I was going to respond to this novel. Personal connections to the loss of my grandparent, who reminded so much of Silver Willa, resulted in some initial doubts. I was also apprehensive about the time slip aspect. As a realist, I tend to question the authenticity and mechanics of the whole time slip scenario. However, I make the exception A Lifetime of Impossible Days. I was able to overlook the whole time slip/fantasy and magical element of this novel. It lifted this book to great heights and I am so glad I  was able to actively cast my doubts aside and come to the party!

A very rare book that captures the delicate cycle of life, A Lifetime of Impossible Days is a brave and bold novel from a talented new voice in Australian fiction.

On a lighter note, I feel inclined to pop an apron on and whip up a batch of those famous jam drops! Thanks for the recipe inclusion Tabitha Bird!

A Lifetime of Impossible Days by Tabitha Bird was published on 4th June 2019 by Penguin Books Australia. Details on how to purchase the book can be found here.

To learn more about the author of A Lifetime of Impossible Days, Tabitha Bird, visit here.

*I wish to thank Penguin Books Australia for providing me with a free copy of this book for review purposes.

Tea with Mrs B: Tabitha Bird 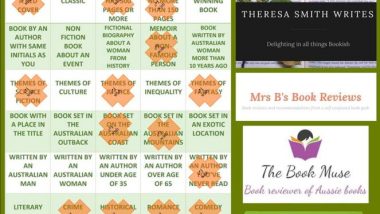